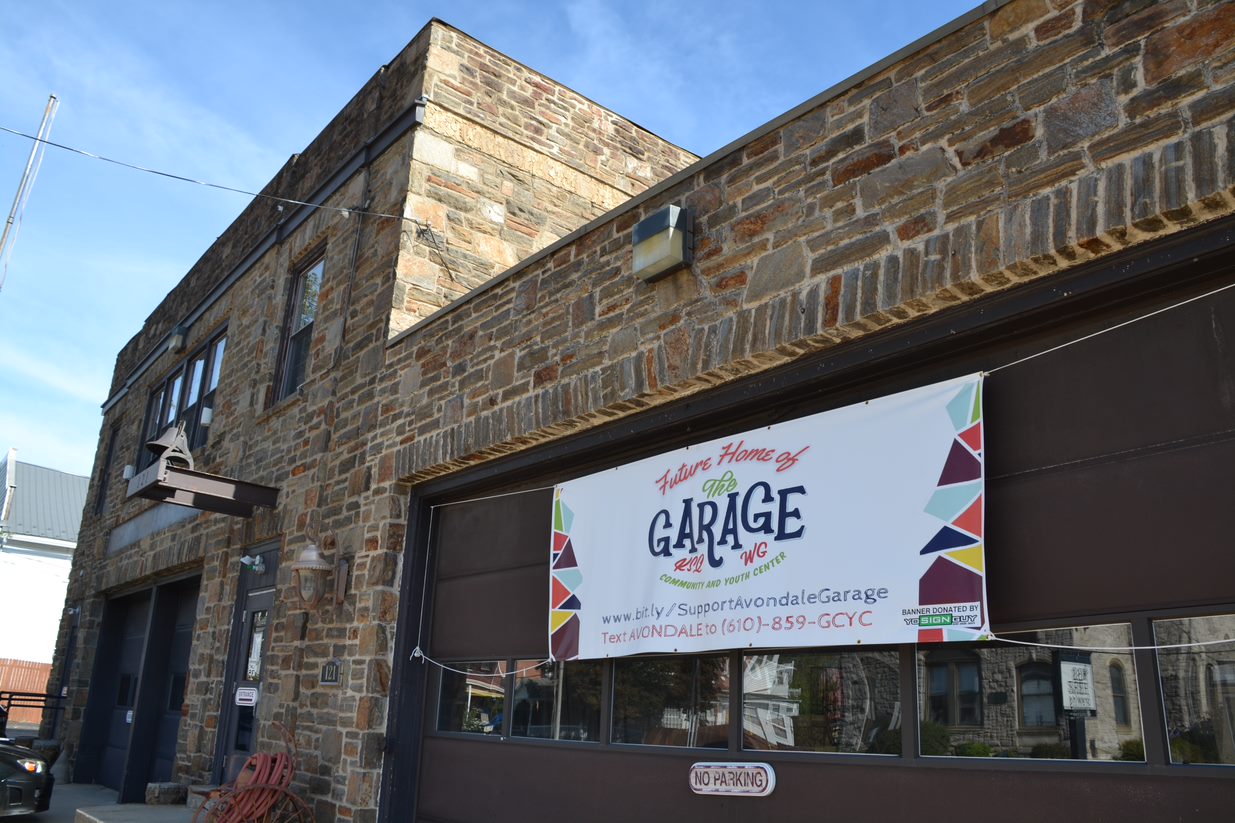 Since its founding 20 years ago, the Garage Community & Youth Center has served as an after-school and youth development center for thousands of middle and high school students in Kennett Square and West Grove.

Early in the morning of October 2, a group of nearly a dozen warm souls who volunteered for The Garage entered the former Avondale Fire Hall with the intention of demolishing some of its interior walls and begin the next chapter in the organization’s history.

Over the next few hours, garage general manager Kristin Proto and volunteer project manager Alex Kotler placed tools in the hands of volunteers, including Chester County Commissioner Josh Maxwell, in an effort to transforming the historic building from a former fire station into what will soon become the new home for The Garage, following the organization’s purchase of the building on September 17.

The building, slated to open next winter, will replace The Garage’s current Avondale-West Grove Center on Rosehill Avenue in West Grove.

Negotiations to purchase the building began last winter during talks between members of the Garage and Christine Trumbull, wife of the late David Hughes, who was a longtime owner of a local Servpro franchise, and whose company occupied the site for several years.

“Christine contacted us and told us that the building was for sale and that David loved this building – that it was his pride and joy that he was able to work in this space,” Proto said. “Christine then told us that she really wanted the future of this space to serve the community, and go to those who would take great care of it.

“She told us several times that every time she walked past the building, she felt like it would be a perfect home for The Garage.”

A recent tour of the two-story, 11,000 square foot building clearly shows that the first phase of its extensive renovations will better meet the needs of youth in the West Grove-Avondale community. One room will be repurposed as a performance and stage space, with portable audience seating that can be adjusted to serve other purposes. The first floor projects will also include bathroom upgrades and the conversion of a space to be used as a creative space, a small cafe.

The second floor will be redeveloped to include the Garage’s administrative offices, as well as provide possible office space for local nonprofit and legal aid organizations and agencies that partner with the agency.

The second phase of the renovations will see the building’s kitchen expanded and its laundry room converted into a meal preparation area.

The benefits of moving the West Grove-Avondale branch of The Garage from its current location in the West Grove Borough to its new location are numerous, Proto said.

“Once we did that first tour, we realized there was so much potential here,” she said. “It is the location of so many families we serve in Avondale and so many other young people who could use our services. Because of the size of this new space, we knew we could expand our services, either on our own or by partnering with other organizations we already collaborate with. »

Although Kotler is now the main contractor for the renovation of the old fire station, he is by no means a stranger to the Garage. When he was a student at Willowdale Chapel, he often participated in garage programs and later volunteered as a mentor to students. His wife Kristin is also a former staff member of The Garage.

The Garage is set to kick off a $900,000 fundraising campaign that will be led by Proto, Development Director Kate Martin and The Garage’s Board of Directors. The funds raised during the campaign will be used to pay for the purchase of the building, as well as renovations. Once the campaign reaches its goal, Proto said The Garage can then devote more funds to student programming, hire additional staff and reduce the cost of expenses. She called the fundraising campaign “a long-term investment in the Avondale community.”

“We are confident that we have such a large base of funders who are so generous and so invested in the work that we do, that we are very confident that we will achieve our goal,” she said. “The Garage has been in Avon Grove for ten years, and the investment that will be made in our fundraising campaign, which will translate into the next 30 to 40 years of the Garage and its commitment to thousands and thousands of young people in this area , for generations to come.