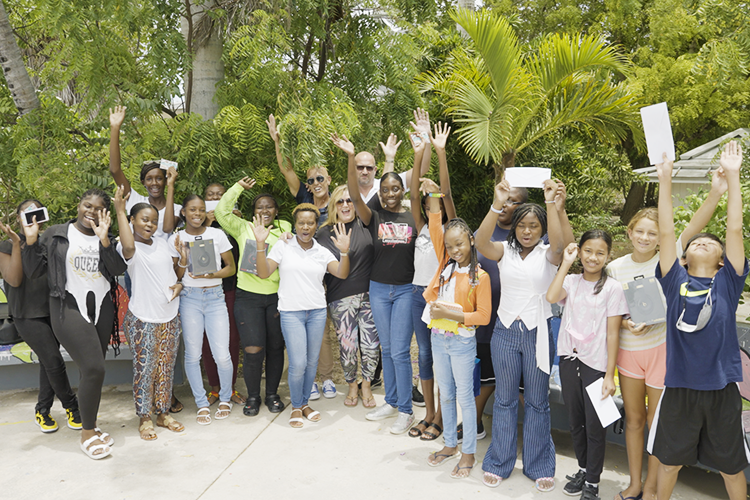 Founder Johnny Legend told The SUN he was very grateful to work with Roxann Wake-Forbes and see the children take part in the DJ workshop and dance competition during the event.

“We raised 10,000 for the Edward Gartland Youth Center during the 3 day Caribbean House Evolution event. I am so grateful to be working with Roxann Wake-Forbes and seeing the kids participate in the DJ workshop and the dance competition. Their enthusiasm and enthusiasm are contagious. and seeing them shine bright for a few hours is magical. The two winners of each competition received a pair of Beats by Dre headphones, and all the children also received a gift for their participation,” he said.

Legend thanked Graceway Supermarkets, Lemn2go, anonymous donors, Lucy Stubbs and CHE resort partners The Shore Club and Grace Bay for their support and a special thank you to Bradley Theodore for his three beautiful works of art which he generously donated. for the silent auction.

Edward Gartland Youth Center Director Roxann Wake-Forbes said, “We are thrilled to be a part of this event and to be able to give children the opportunity to experience different forms of expression through music and a great thank you Johnny and the incredible support of our community for making the annual CHE Festival such a great success.

Founded by Johnny Legend, this mega party has received great support from the community in its efforts to raise funds for the non-profit organization, Edward Gartland Youth Center.

Dedicated to art and community, Caribbean House Evolution is where locals and visitors partake in the joyful beats of house music and be themselves in all their diversity and international DJs come together and participate in a musical experience.

The Edward Gartland Youth Center is a non-profit organization dedicated to empowering teens and providing equal opportunity to all young people on the island of Providenciales.

PFL donates 10K to Dynamite Youth Center, a cause close to their hearts