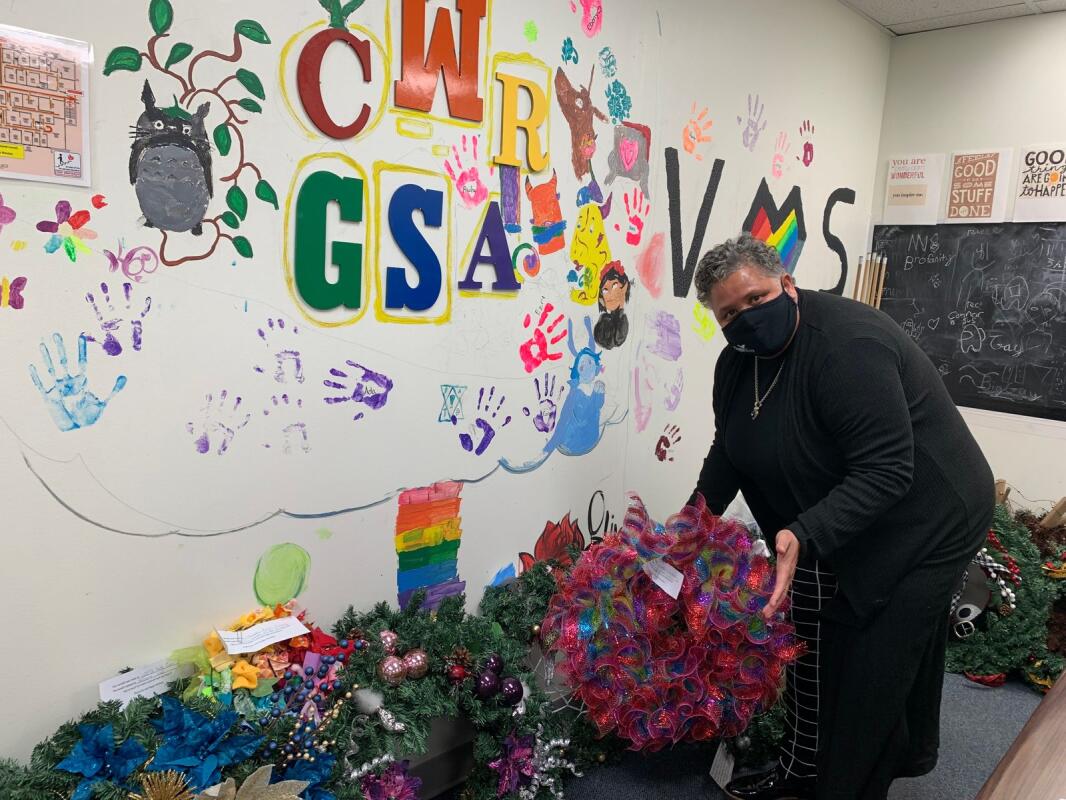 Tanager Place LGBTQ Youth Center Director Lori Ampey holds a wreath which will be auctioned online for the benefit of the Center. (Grace King / The Gazette)

The Tanager Place LGBTQ Youth Center is auctioning 50 wreaths, donated and decorated by members of the community, to benefit the centre’s students. Auction closes December 7 (Grace King / The Gazette)

CEDAR RAPIDS – Center for LGBTQ youth Tangier Place is auctioning Christmas wreaths created by students and business owners in the community to benefit the center.

The wreaths created for the fundraiser – called “It’s the Season of Love” – can be viewed and posted online at tanagerplace.org/prevention/lgbtq-center. Auctions end at 7 p.m. on December 7.

Winning bidders will be contacted to arrange pickup or delivery of the wreath. Each wreath is accompanied by a note indicating who made it and the meaning behind it.

The wreaths are varied in their decorations. A wreath is more classic – decorated with blue and gold flowers and sparkling lights that run on a battery. Another was painted brown and decorated with antlers and a red nose to resemble a reindeer. Yet another is decked out in patriotic red, white and blue.

“It’s not about who has the best crown, it’s about the love that went into decorating the crowns,” said Lori Ampey, director of the LGBTQ Youth Center.

Center member Blaze Schmidt, 19, decorated a wreath to represent LGBTQ pride. Schmidt has been coming to the center since they – Schmidt’s favorite pronoun – were in their second year in high school. They felt like it was a place where they could be themselves.

Pride Month is celebrated annually in June to recognize the contributions of lesbian, gay, bisexual, transgender and queer people and their continued struggle against discrimination. It is celebrated in June to mark the anniversary of the Stonewall Riots, protests by members of the gay community in response to a police raid that began in 1969 in New York City.

Decorating the wreaths has been a way to prolong the pride of the holidays, said Schmidt, a time when many LGBTQ people struggle not to be accepted by their peers or family.

The wreaths donated and decorated by the community are a symbol of the outpouring of love and acceptance of LGBTQ youth here at Cedar Rapids, Schmidt said.

Students from the Tanager Place Autism Spectrum Disorder Support Group decorated a wreath by sticking puzzle pieces on it, which is recognized as a symbol of autism awareness.

Silas Thomson, 9, a member of the Autism Spectrum Disorder Support Group, painted some of the puzzle pieces blue before gluing them to the crown.

“It looks very good,” he said.

Ampey hopes the fundraiser will bring in around $ 3,000.

Fifty undecorated wreaths were purchased and donated by Cedar Rapids Toyota. CR Pride Fest donated money for the materials to decorate the wreaths.

The LGBTQ Youth Center is a safe and confidential place for lesbian, gay, bisexual, transgender and questioning youth and their allies. The center was launched in 2018 to be a place where young people and families could find support and be themselves.

The center meets weekly on Wednesday and Thursday evenings, every other Friday and every second Sunday afternoon at the Tanger Place Estle center, 1030 Fifth Ave. SE, Cedar Rapids.

The center offers several support groups, including a transgender support group and a parent support group. He teaches skills such as cooking, financial literacy, and social skills.

For questions or more information about the LGBTQ Youth Center, contact Lori Ampey at [email protected] or by phone at (319) 777-8068.