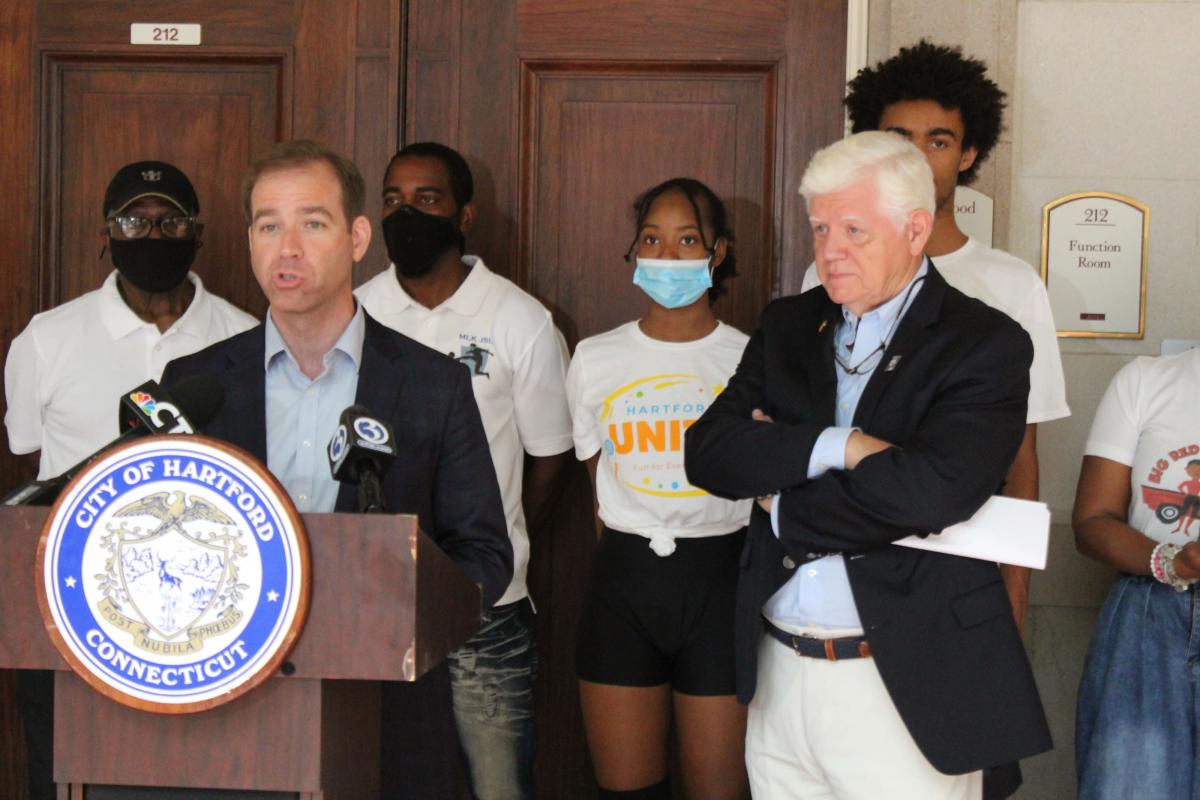 Faithlyn Johnson, the founder and CEO of ActUp Theater, says she starts a workshop at the theater by saying “ActUp.”

“Then everyone says, ‘I am enough.’ We all like to be in a place where we feel complete, whole and authentic. Accept?”

ActUp is one of 63 youth-serving organizations to receive a portion of Hartford’s $1.9 million second round of UNITY Youth Engagement Grants. The second round of funding was announced Thursday by Hartford Mayor Luke Bronin and U.S. Representative John Larson at City Hall.

The American Rescue Plan Act funds the city received will serve approximately 9,000 city youth in a variety of activities, including sports, arts, music, dance, reading and mentoring. (The first round of funding was about $1.5 million, according to Kim Oliver, director of the Department of Families, Children, Youth and Recreation.)

All programs run by youth-serving providers will be free to Hartford youth.

The grants are just part of the larger plan for how the city has allocated its ARPA funds to “help, recover and heal everything the pandemic has caused,” Bronin said.

“[It’s] doing the vital work of helping our young people reconnect, heal, recover and have fun after everything they have been through for the past two years during the pandemic,” he said.

Bronin thanked Hartford’s federal delegation – American senses Richard Blumenthal and Chris Murphy, as well as Larson – for entrusting the funds to the municipal level rather than the county level “so that they have the greatest impact.”

Larson, for his part, credited Bronin with lobbying on behalf of not just Hartford, but the entire state as to how funds should be allocated.

“When you get to the core of what moves the nation, it’s when the people who are on the ground in their community understand the needs of the community and then are able to translate that,” Larson said. “It’s a model for the country and how the country should go about spending ARPA money. …

“It only happens if you have a plan, a commitment and a vision. This mayor has a vision while the rest of the world wears bifocals.

Ricketts said he had run MLK’s youth soccer program for 40 years and during that time had never had a child involved with the police.

“All the kids that go through my program, I say, are my sons, and I live by that,” he said.

He was also quick to add that more needed to be done.

“We are not ungrateful,” Ricketts told Bronin and Larson. “But that $1.9 million is just a drop in the ocean. We need a lot more money to do what we need to do for our young people.

“When I hear, ‘These kids are bad,’ I’ll tell you right now, I’ve never seen a bad kid,” he said. They need guidance, they need direction, they need understanding, they need love. That’s what’s missing. »

Ted Glanzer can be reached at [email protected]