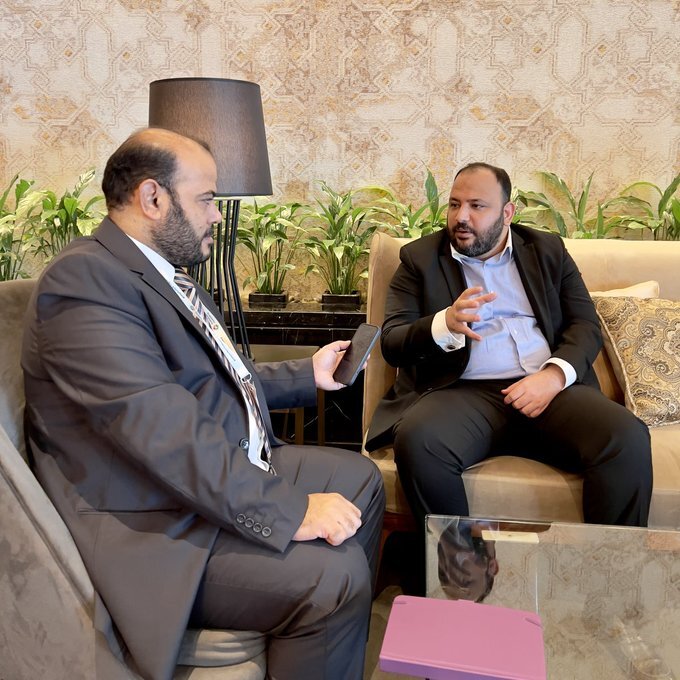 Doha: HE the Libyan Youth Minister Fathallah Al-Zani affirmed the importance of strengthening joint cooperation between his country and the State of Qatar in the fields of youth, while bringing closer the joint relations between the two countries.

This came in an exclusive interview with Qatar News Agency (QNA) on the sidelines of his visit to the country leading the delegation attending the 54th International Youth Hostel Federation Conference, which ended on Monday.

The Libyan Minister of Youth said that his visit to the State of Qatar is an important opportunity to promote joint Arab action with Qatar in the field of youth welfare, noting that during his meeting with HE the Minister of Sports and Youth Salah bin Ghanem Al Ali during the visit, he mentioned the reactivation of cooperation between Libya and Qatar in the field of youth, and the development of the capacities of young people, as well as the coordination of positions at the regional and international levels, this coordination having resulted in the victory of the two countries’ candidates in the elections for the Board of Directors of the Federation which took place in Doha within the framework of the conference.

HE expressed the hope to establish joint cooperation between the two countries, especially with Qatar’s regional and international presence in the fields of youth and sports, as Qatar will host the world’s biggest event this year, the FIFA World Cup Qatar 2022, which is a global forum cherished by all Arabs.

He stressed that his visit to Qatar is part of the activation of the agenda of Libyan youth diplomacy at the international and regional levels, especially since the Libyan Ministry of Youth is the first ministry to deal separately with youth for 70 years, noting that the activation and re-enhancement of the role of Libyan youth abroad through various youth structures, led by the Association of Libyan Youth Hostels , is part of the competences entrusted to the ministry.

The visit, he said, came to promote qualitative participation in this international conference, as it is an important position in the work of the International Youth Hostel Federation (IYHF), which is the one of the largest youth organizations in the world and within the framework of the United Nations system.

The Libyan Minister of Youth stressed his country’s interest in promoting the joint action of Arab youth, revealing in this regard that Libya is ready to organize the celebration of “Benghazi, the capital of Arab youth 2023”. , in application of the decision of the Arab Youth Council Ministers of Youth and Sports in 2018, which agreed that Benghazi would be the capital of Arab youth for 2022, but this was postponed until next year due of the Covid-19 pandemic.

He explained that the ministry worked early in preparing for this occasion, and a number of steps were taken and an executive committee was formed for this event to draw up a map of activities related to this occasion, in which will reflect the different environments in Libya, be it desert, green mountain environment, exploration and adventure, as well as coastal tourism, in addition to a set of programs related to artificial intelligence, youth, media, modern technologies, youth and entrepreneurship. This confirms Libya’s willingness to receive Arab youth in Benghazi next year, he said, indicating that the Arab Youth House will be inaugurated in Benghazi as part of the celebration, to be an indication of joint Arab action and to be a commendable return of Arab activities. for young people in the Libyan state. He also pointed out that Libya is ready and that the political leaders have given the facilities and mobilized the necessary capacities to welcome Arab youth in Benghazi, the capital of Arab youth.

HE Minister of Youth Fathallah Al-Zani stressed that the choice of Benghazi as the capital of Arab youth is due to the cultural and historical particularity of this ancient city, as it contains all the social components that populate Libyan soil, and he is a source of cultural inspiration. This coastal city also includes many historical monuments as it is one of the political capitals in the history of Libya, he said, stressing that the symbolism of the choice of the city for its cultural specificity will not prevent organizing out-of-town events like the visiting young Arabs will learn about the capabilities, resources and industries of different Libyan cities

HE Libyan Minister of Youth, Fathallah Al-Zani, told QNA that the Libyan Ministry of Youth works to realize the aspirations and ambitions of the youth and puts on its permanent agenda how to overcome the challenges facing young people who have suffered over the past period. following political crises.

The Ministry has set itself a scale of priorities, the first of which is to work in partnership with young people themselves, as this is to ensure the empowerment and development of young people and to strengthen local and international partnerships. to develop their capacities, strengthen the role of state institutions, and use it in a national strategy, he said.

He pointed out that one of the most important achievements that the ministry has made in favor of youth is the preparation of a legal and legislative framework that places young people in the political system of the government and at the heart of the general policies of the ‘State.

The existence of a national strategy for young people of both sexes has become urgent and necessary, as well as the organization of the national youth movement, the activation of their role at the international level and their motivation for political and social participation to preparing a generation of young leaders to drive the next stage, noted HE the Minister.

He added that the ministry works first to empower young people within the ministry itself to lead youth work. The ministry is working closely with the youths to confirm their ability to lead and take responsibility for state-building, as they are the most important resources for building the country, he added.

The ministry has a comprehensive calendar for training and capacity building of young people, based on discipline, moral participation and mutual respect, and on the basis of learning the tools of the political process at the national level, and how to express the pressing issues that concern young people to be an icon of participation in public life, said the Libyan minister. Therefore, the way was to establish local youth councils to be an umbrella for diverse groups of young people aged between 18 and 35 to choose their representatives locally, and for these councils to be platforms and forces advocating for the problems of young people and, at the same time, incubators to build their capacities, he added.

The National Young Leaders Preparation Center has also been established as part of the implementation mechanisms of this initiative, and deals with organizing a set of training programs for young men and women, he said. said, underlining the existence of political will to meet the requirements and the right environment to stimulate youth participation, thus more than 500 structures for young people have been developed, in addition to good measures concerning budgets in favor of young people, since the budget allocated to young people has increased from less than 1% to almost 10%, as other important initiatives have been adopted, such as the initiative to facilitate marriage, which has benefited more than 100,000 young people men and girls at the national level, to build cohesive families and strengthen the bonds between them