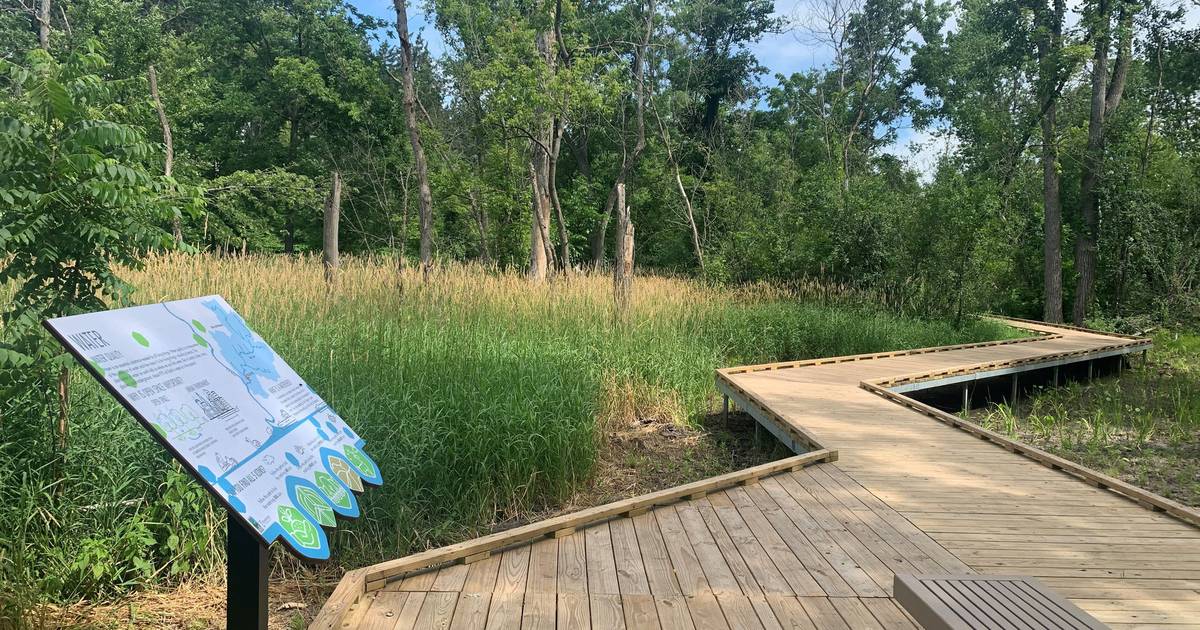 Its towering pine canopy, streams and rustic lodge make the Hanover Township Izaak Walton Youth Center & Reserve at the end of Jay Street a natural respite from city life on Elgin’s east side.

With the improvements recently completed, local officials hope more people will come to enjoy the recreational opportunities the 14-acre site now offers to the public.

“This property has always been a hidden gem in Elgin. Thanks to these improvements, it is now more accessible,” Hanover Township Supervisor Brian McGuire said.

The work on the youth center and reserve cost approximately $800,000, half of which came from the township’s capital budget and the remainder from an open land acquisition and development grant obtained by the through the Illinois Department of Natural Resources, McGuire said.

“The Ikes (Elgin Chapter of the Izaak Walton League of America) donated their acreage to us in 2013 so it could be developed like this,” McGuire said. “To this we added an acre of adjacent land purchased in Elgin in 2019.”

In turn, new Izaak Walton League chairman Tom Stewart said the arrangement has been beneficial for the club, which can focus on its environmental efforts, oversee the reconnaissance troops that meet at the center and work with the township to provide more educational programs.

“And I can tell you from experience that now you can cross the creek without losing a tennis shoe,” Stewart said.

Named after a 17th century English conservationist, the Izaak Walton League of America was formed in Chicago in 1922.

The Elgin Ikes Chapter began in 1931 and the lodge, at 899 Jay St., was built in 1939. Members planted the pines on the property in 1944 to honor those who had served in the United States military.

From 2013 to 2021, the Township of Hanover had a satellite office in the lodge. Last year, the township refocused the facility toward running youth programs, including establishing a year-round youth center and hosting summer camps.

Thomas Kuttenberg, director of community and government relations for the Township of Hanover, said the facility also offers programs for seniors, including archery lessons.

Kuttenberg said the township hopes to host a series of outdoor concerts to be held this fall at the new amphitheater. He said he has been in touch with local theater groups to hold productions there next spring and summer as well.

This stage will host a performance by School of Rock during Elgin’s National Night celebrations on August 2nd.

“And we will have a ribbon cutting for the Izaak Walton Reserve improvements at 9 a.m. on Saturday, August 6,” Kuttenberg said.

McGuire and Stewart will speak that morning, as will Kaptain and State Senator Cristina Castro.

Mike Danahey is a freelance journalist for Courier-News.