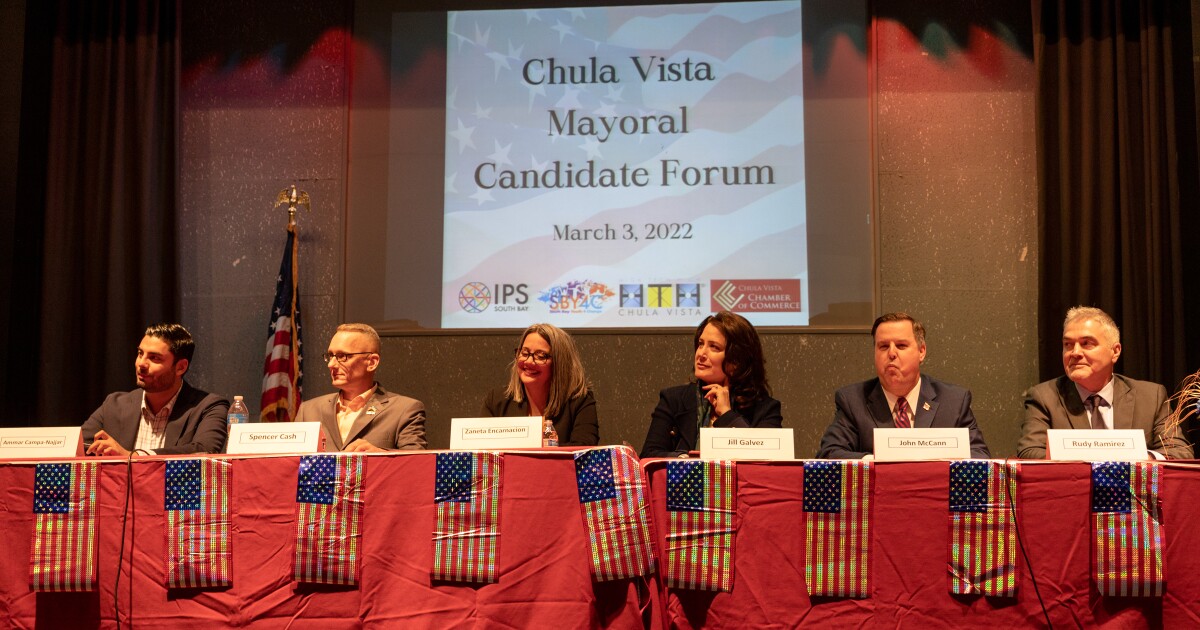 Six candidates vying to become Chula Vista’s next mayor discussed how they would combat homelessness, help small businesses and prevent drug-related harm among local youth at a forum Thursday.

The event was held at the Chula Vista Presbyterian Church and was organized by the Chula Vista Chamber of Commerce, Institute of Public Strategies and South Bay Youth 4 Change. Chula Vista High Tech High students posed a series of questions to candidates largely focused on public safety, economic development, and youth-related topics to lead a holistic conversation about how to build a more equitable and prosperous city. .

The candidates are Ammar Campa-Najjar, who previously ran for Congress; Spencer Cash, an Army veteran who served as a medical evacuation helicopter pilot; Zaneta Encarnacion, Chief of Staff to the President of Southwestern College; District 2 Council Member Jill Galvez; District 1 Council Member John McCann; and Rudy Ramirez, who served on the board between 2006 and 2015.

Chula Vista police officials said earlier this year they were seeing an increase in the amount of fentanyl on the streets, a trend seen in San Diego County. More than 460 people in the county died in 2020 from a fentanyl overdose, an increase from 151 in 2019, according to the county medical examiner’s office.

The candidates agreed that more could be done at the local level to prevent drugs from reaching young people.

“It’s not just about enforcing the law. It’s not just about prevention. It allows our young people to take their talents and do something good,” said Campa-Najjar, adding that he would like to see a full return of parks and recreation activities and back-to-school programs after months of breaks. related to COVID-19. .

With a shortage of about 40 police vacancies, Cash said the police department needs to fill those positions “and that will help keep drugs out of our community.” McCann said the city’s school resource officer program needs to be fully funded so officers can educate and build relationships with young people.

Zaneta said there needs to be better communication on the various councils. She plans to bring “all of our school board members and elected colleagues together and come up with a plan for how we can support our young people in a comprehensive and holistic way.”

Galvez said she wanted to see “what we all need to do to be more aggressive and end this drug.”

Educating young people about the dangers of drugs is insufficient, Ramirez said. “We need to be able to give children life skills so they know how to act on information,” he added. He proposes a sports tourism program for young people that would be funded without depleting other vital resources.

Candidates agreed that more could be done to address the local homelessness crisis. City officials and homeless advocates estimate that there are more than 700 people living without shelter.

McCann said he led the efforts that created the police department’s homeless outreach teams and would continue to support their work. Ramirez said the community knows what it needs to do to fix the problem and that the resources, including nonprofits focused on helping the homeless, are there but there is no not enough action going on.

Campa-Najjar said Chula Vista should replicate the wraparound services offered by the City of Redlands, which include case management and meeting basic needs like food and shelter.

Cash said local nonprofits are best to lead efforts, but added that creating a “pipeline for homeless people to move on” is also needed. He suggested married quarters for students and trade schools.

Zaneta, who said he was homeless for two years as a teenager, and Galvez applauded the city’s efforts to soon open South County’s first homeless shelter with prefab units that can accommodate up to 138 people. It will also be necessary to partner with expert nonprofits to offer comprehensive services and to have a rehab center nearby, they said.

When it comes to helping small businesses, candidates agreed that the city needs to streamline its permitting process and make it more affordable so that there is a fair distribution of resources. Ultimately, they agreed that the new businesses will help the community live, work and play locally.

The election, which will also include races for Districts 1 and 2 and City Attorney, will be held on June 7. The submission period ends on March 11.