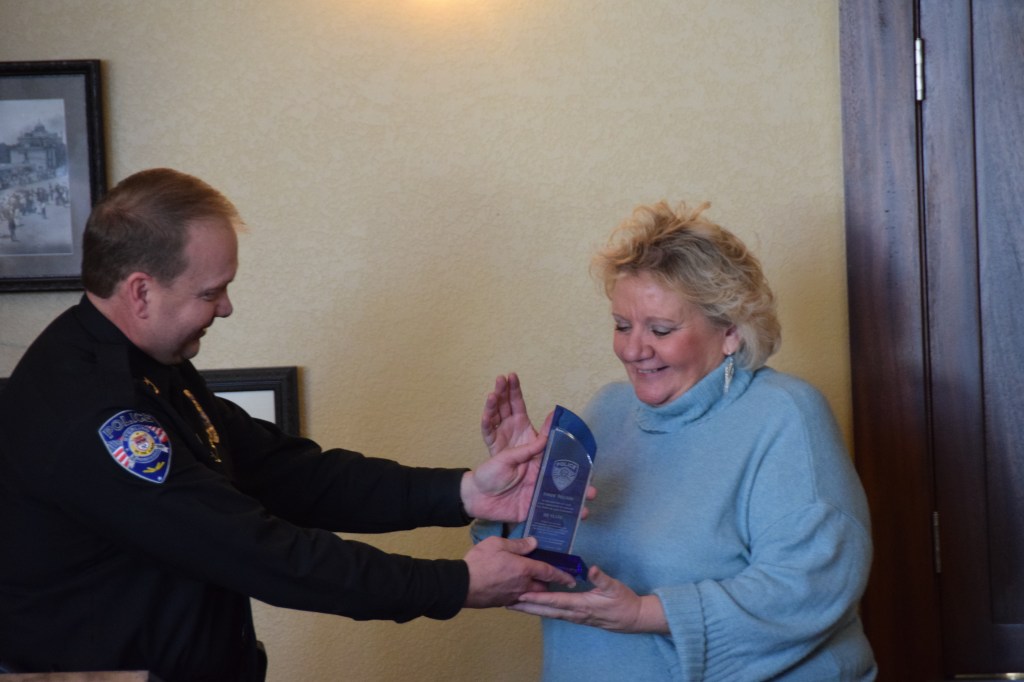 After 38 years of dealing with children going through the criminal justice system, Virgie Nelson could be excused for becoming cynical about the direction society is headed.

Instead, the retired Sterling Police Department youth services coordinator said she had hope.

Nelson’s last day with the SPD was officially Friday. On Thursday, friends, family and colleagues gathered at the High Plains Education Center at the Overland Trail Museum to send their congratulations and well wishes to the passionate youth advocate as he enters a new phase in his life.

Nelson’s career in youth services began in 1984, when she was hired as a part-time counselor by Stan Gorman. That same year, the Town of Sterling absorbed Youth Services and began funding its activities. It then became a division of the SPD, and in 1986 Nelson resumed operation.

Sterling Police Chief Tyson Kerr noted Thursday that Sterling is the only city in Colorado that operates and funds its own youth services program, which has been a point of pride over the decades.

Kerr explained the role of youth services, noting that it increases the “option of release from law enforcement conferences” for minors contacted for petty crimes, suspicious activity or safety concerns. The division focuses on addressing delinquent behavior in its early stages to reduce overall crime in the community, through educating youth and families about personal and public safety issues. The division is also responsible for managing the screening of juveniles into prisons and the supervision of juveniles accused of crimes. For Nelson, this included testifying in court about a child’s criminal history, previous interventions and alternative sentencing options that could prevent children from going to jail, as well as acting as an agent of juvenile probation for Sterling City Court.

Among the things Nelson is most proud of during her career is that the division was about to go beyond a single disturbing incident to get more information about individual children “so that the whole child and family can get the services they need”.

Nelson’s impact extended far beyond the young people and their families with whom she worked directly. She has worked with a number of partner organizations who also serve young people, inside and outside the justice system, and Kerr said her “experience, expertise and influence” were known throughout the world. ‘State.

Kerr also noted that Nelson’s “leadership and guidance” was essential to the development of many programs and services. Two that Nelson listed among his greatest accomplishments were programming that deals with the dangers of the Internet and “High on Life and Nothing Else”, a drug and alcohol awareness program.

In her presentation, Kerr thanked Nelson’s family — husband Gary and daughters Karley, Kendi and Corrie — for “sharing it with us and the sacrifices you’ve all made along the way.”

Nelson and her guests also heard from others about the impact she had, including a pre-recorded video presentation from her daughter, Corrie, who was unable to attend the celebration. In it, Corrie thanked the SPD for ‘not firing my mother’, recalling some humorous incidents from Virgie’s career, as well as expressing sincere gratitude for the department’s support of Virgie as a working mother. .

Kerr then presented Nelson with a memorial plaque thanking her for “years of service, dedication and loyalty, not only to the department, but to our entire community.”

Next, the floor was up to Nelson. While assuring Kerr – and her guests – that she had pared back her speech, she shared thoughts and memories ranging from a passionate appreciation of local law enforcement as the heroes the nation needs, to a dark memory of officers who lost their lives during her tenure with the department to, of course, times that reflected her — as Kerr put it — “a unique sense of humor.”

After the speeches, Nelson spoke briefly with the Journal-Advocate about his career and his plans for the future.

The advent of the “digital age” and its impact on communication and teaching has been the biggest change in the past 38 years, Nelson said.

“Behavioral issues are no different. I am often asked, are the children worse now than they were? No, no,” she said.

This belief, Nelson said, is at the heart of his work.

“You can be in this job if you believe it can be learned. It is learned; a successful life can be learned. Everyone has the potential and deep in their hearts everyone wants it,” she said. “Sounds quite noble, doesn’t it – but it’s true though.”

While retiring from the SPD, Nelson is not giving up her job entirely – she will continue to work for the Colorado Division of Youth Services on a 32 hour per month basis caring for children who are in prison. She also plans to travel and spend time with her family and her dog.

Kerr said the department won’t immediately fill Nelson’s position, but it will take some time to determine what the youth services program will look like in the future. In the meantime, he said, essential functions such as referrals to partner agency services will continue.

Nelson has given a lot of credit to those she has worked with over the years, both law enforcement and other partners.

“It all takes a lot of energy… It’s so little about me and so much about the family of social service providers,” she said. “Together, we are the strength and the hope of tomorrow. And I have great hope for tomorrow. I’m scared for today, but I have a lot of hope for tomorrow and I believe in tomorrow.